Design/Methodology/Approach: Eight-month old MSXJ papaya hybrid plants in the
fructification stage were collected in Cotaxtla, Veracruz, Mexico. They were
superficially disinfected with abundant running water, detergent during 30 min, and
then alcohol at 70% was added for one minute, commercial chlorine at 30% for 30
min, and they were rinsed with sterile distilled water; then the meristems were
cultivated in MS medium and after 30 d a subculture was made. The DNA extraction
was made with the CTAB method, and the DNA PCR was done with the Deputy et al.
(2002) method, and the primers T1, T12 and W11 were used.
Results: The T1 primer was the positive control and the T12 and W11 primers
allowed the amplification of fragments that identify hermaphrodite, feminine and male
plants, while the T12 and W11 primers were specific for hermaphrodite plants.Study Limitations/Implications: It is required to standardize the method for it to be
inexpensive.
Findings/Conclusions: The sexuality of papaya plants can be differentiated until the
stage of flowering, which is why the implementation of molecular markers would
facilitate plant selection if it is implemented at a large scale. Costs, maintenance time
and elimination of plants of unwanted sex are reduced this way. 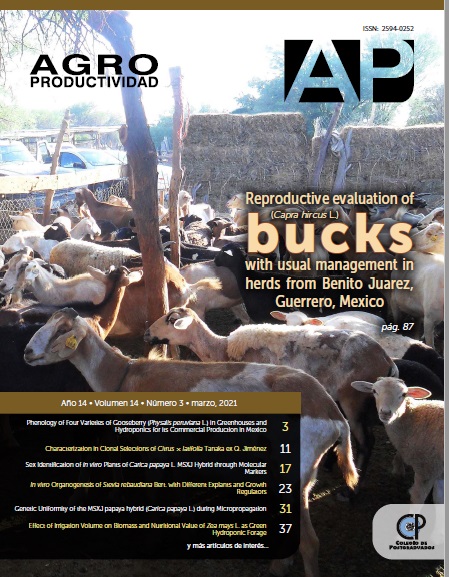