Objectives: i) to determine the total degraded areas of EZ in the country, ii) estimate the priority degraded areas for restoration planting, and iii) assess the species and planted areas of the Pinus genus and whether these were within their natural distribution range.
Design/methodology/approach: total EZ degradation surfaces and priority degraded areas for restoration plantings were determined with the Germplasm Movement Zones and Restoration Zones of the Comisión Nacional Forestal (National
Forestry Commission, CONAFOR), while planted surfaces were estimated from the CONAFOR records from 2016 to 2018.
Results: on degradation, it was shown that three EZ had large areas, six EZ intermediate areas and 32 EZ small areas; two degradation types (III.C and III.D) were prioritized and viable for restoration plantings; four species (23 %) were established outside their natural distribution range while ten (59 %) were within it, three species were undefined.
Study limitations/implications: for restoration of areas, it is necessary to avoid high initial plant mortality and poor growth.
Findings/conclusions: the north of the country has larger areas with degradation,while the center, north and south have areas with medium and low degradation; planting species outside their distribution range leads to plant adaptation problems. 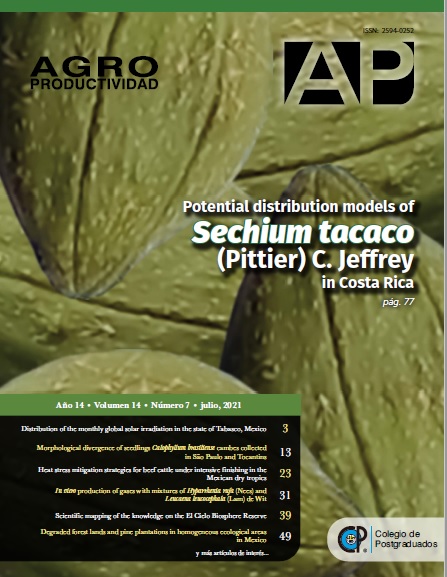