Objective: To determine the stigma receptivity and the pollen viability in order to make manual crosses and obtain viable progeny in castor bean (Ricinus communis L.).
Design/Methodology/Approach: Pollen viability tests were made on breeding materials by staining with acetocarmine solution. In elite materials, the receptivity of the stigma was evaluated with hydrogen peroxide. From the inflorescences, the male ones were removed and the female ones were preserved, which were covered with a glassine bag. After six days, they were checked and when they were considered receptive, manual pollinations were carried out between viable pollen materials and receptive stigma. The pollen of the male parent was impregnated in the stigmas and the inflorescence was covered again.
Results: The breeding materials exhibited viable pollen since they were stained red. Whereas, the application of hydrogen peroxide to the stigmas of the elite materials showed bubbling, indicative that they were receptive. In 2014, 400 inflorescences were pollinated with 8 flowers on average and a fruit pollinated percentage of 61.21. In 2015, 245 inflorescences with 12 flowers on average and 61.24% of fruit were pollinated.
Study Limitations/Implications: Temperature and relative humidity were fundamental factors for the success of castor bean fertilization.
Findings/Conclusions: The elite castor bean materials presented receptive stigmas and the improved viable pollen materials. Manual crosses produced fruits and seeds. The fruits pollinated were 61%. 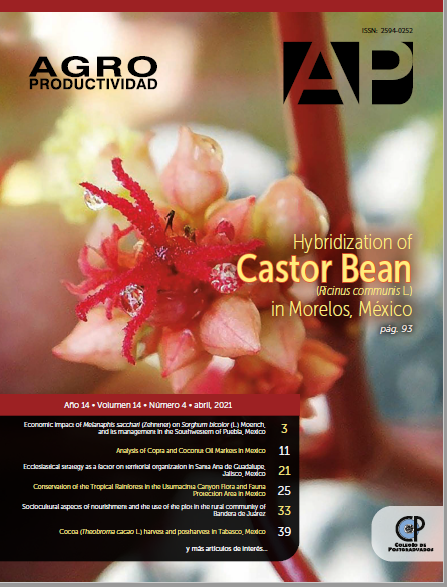